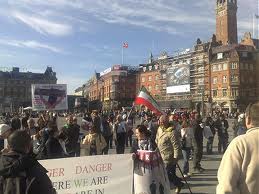 Protest for Refugees in Holland

A Dutch gameshow is giving failed asylum seekers the chance to win 4,000 euros (£3,525) to help them start a new life back in their country of origin.

The winner is the one who can best demonstrate just how well they know their adopted country.

More on this story from Reuters here:

Their expertise on Dutch geography, history, politics, art, and language among other things is unlikely to be of much use once they have left the Netherlands, but the editor behind the show says he wants to make a serious point about immigration policy and give the winner money for his or her new life.

The Netherlands was long regarded as among the more generous countries in welcoming asylum-seekers and immigrants but that has changed over the past decade, reflecting voter concerns over the large number of Muslim immigrants.

Geert Wilders, who heads the anti-Islam, anti-immigration Freedom Party, is the ruling coalition’s key ally in parliament and has used that influence to push for tougher immigration policies.

“This programme is about the children of asylum-seekers who have lost out in the asylum process. Children who have sometimes been in the Netherlands longer than eight years,” said Frank Wiering, editor-in-chief of Dutch broadcaster VPRO.

“It is harrowing that these people have to leave. We’ve made a quiz with these people and you can laugh about it but the subject is not funny,” Wiering told Reuters.

The one-off quiz show is called “Away from the Netherlands” — although the title also translates as “Crazy about the Netherlands” — and will feature five contestants between the ages of 15 and 22 who have spent much of their lives in the country and now face expulsion.

Public and political criticism has grown this year over the expulsion of young asylum seekers, many of whom have spent most of their lives in the Netherlands.

The outcry prompted Immigration Minister Gerd Leers to grant residence permits to a 14-year old Afghan girl and her family.

In several Dutch towns, residents and local politicians have asked the minister to grant permits to asylum-seekers with children, but without much success so far.

Wiering said there were about 15,000 children, often part of families, seeking asylum in the Netherlands: of those, 2,000 have been in the country for more than eight years.

And he said that rather than expel them, the Netherlands should take advantage of their appetite to learn, to integrate, and prosper.

“I think we should not be afraid of the new energy that is coming from abroad. We already have hundreds of years experience with this,” Wiering said.

He said the show, whose trailer showed a cheering audience, and a presenter with two female assistants dressed as police or immigration officers, was not a hoax and the candidates were not actors.

The Netherlands has earned a reputation as a breeding ground for new TV formats, bringing the reality show “Big Brother” to the world in 1999.

In 2007, Dutch broadcaster BNN aired a “donor show” where an allegedly terminally ill woman would donate her kidney to one of three candidates with a kidney problem.

At the end of the show, the presenter announced that the woman was an actress and that the show was a hoax, with the aim of shocking people into the realisation that the country lacked enough donors.

Introduced by the show’s producers, Reuters spoke to 18-year old Mathu, who declined to give his surname for privacy reasons, and who said he was one of the show’s contestants.

Speaking in near-flawless Dutch, he said he had lived in the Netherlands since he was seven years old after his parents left Sri Lanka for their safety.

“After 11 years in a country you deserve a normal life. I want to get my driver’s licence just like anyone else. I hope that every child that comes here after me and has to stay here this long and speaks Dutch well gets a chance. The procedures should be much quicker,” Mathu said.

How to Apply for Asylum in the UK: Farsi, Arabic and English